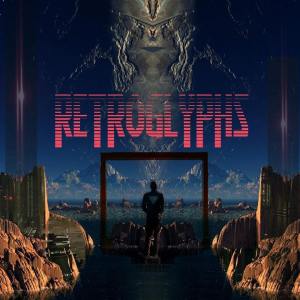 The debut full-length album from Retroglyphs is a self-titled affair, one in which I am extremely honored to have received a pre-release copy of for this review, and it officially drops on May 5th with a special release party in Philadelphia, PA. There is also still time to contribute to their IndieGoGo campaign, which will allow you to not only help them with production and release, but also get you things like a t-shirt, CD, and other goodies including a vinyl that I really want to own! Seriously, go help them out now!

Up until now they have been putting out material rather regularly over on SoundCloud, so it’s nice to see that they’re moving forward with putting out an entire album, because there are nice transitional moments between tracks that make for a full and richly rewarding listening experience cover to cover.

Which I did, a number of times, in order to write this review and I have to say this about Retroglyphs: they remind me of the kind of band that would have played during a high school dance in the 1980s. What I mean by this is that not only is the retro sound there in each song, but there is range among the songs, from the sort that would get a gymnasium full of teenagers dancing (such as the tracks “Wild Road” and “One More Kiss”) to that which would get them slow dancing (like “War Torn” and “Two Years”). But that’s just one side to them.

Where they have a bit of a synthpop side, they also have a bit of a new wave vibe to them as well, specifically in the songs “The Noose,” “No Glory in the Fall,” and “Imposter” which has officially won me over as my favorite track on the entire album. It’s a simple song by design, but there’s also a lot going on in the background, with various instruments coming into play including a surprising saxophone solo which I always appreciate! Very Daft Punk-esque.

That all said, I see a very bright future ahead for Retroglyphs, and can’t wait to get my hands on this physical release! I don’t live too far from Philadelphia myself, actually went there for college many years ago, but not sure if I can make it out to the release party unfortunately. If you can, I implore you to go, and just know that I am insanely jealous! Also, don’t forget their IndieGoGo campaign!