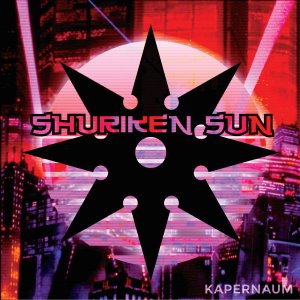 It never ceases to amaze me the way in which I discover various artists from within the synthwave community. In some cases it arises from Twitter, in other cases Bandcamp, and further still through YouTube. In the case of Shuriken Sun, while it was through YouTube, it wasn’t through the usual channels like New Retro Wave, 80’s Emperor, Neon Nights, or others but actually through the recommended videos algorithm.

One night, while searching for the song “He’s Back (The Man Behind the Mask)” by Alice Cooper from Friday the 13th: Part VI, I came across the following cover:

I really dug the synth work on this, and the vocal work wasn’t bad either, so I dug a little deeper and found there was only one other video on their channel:

I am a real sucker for AMVs, and immensely enjoyed the work here, especially the music which goes great with the visuals. It’s a pounding, machine-like beat, with dark synth work that really hammers it home, utilizing a robotic voice for backing vocals, and accompanied by some slick guitar riffs. After listening to this song, I knew I needed more, and luckily there was plenty to be had!

I noticed that there were links to a Bandcamp account in the description for said video, and instantly made my way over there to see what else Shuriken Sun had on the horizon, and I’m glad I did because what I found was simply amazing.

The titular track, “Kapernaum,” kicks things off with such high energy thanks to a catchy beat, fantastic guitar work, and even some chiptune sampling that I already have to proclaim it as being my favorite track on the album. The next couple of tracks, “The Cenotaph” and “Beneath the City,” are much more darker and heavier in tone, with sinister synth tones that set a brooding atmosphere.

It ramps back up again with “Gammacoil Test Drive,” a fast paced track that sounds like it could have come straight out of “F-Zero,” due in part to its chiptune-esque beats and racetrack like announcer voice sampling.

I already discussed the next song, “March of the Hierophants,” above so that brings us to the last song of the album with “Where Horizons Divide.” A surprisingly soothing track that conjured images of watching a neon-soaked sunset, with the lights of a city coming alive, as night begins to slowly engulf every rain-soaked street and dirty alleyway. Perfect end to an amazing album.

I certainly feel like Shuriken Sun has not received as much attention as they deserve so, please, I implore you to check them out and support their work!