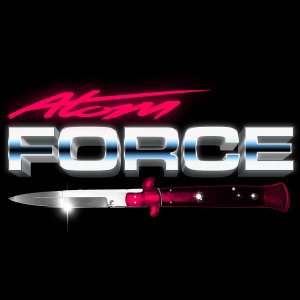 With a handful of singles to their name, and one album, Atom Force is that proverbial unstoppable force that isn’t slowing down anytime soon. Especially not while they’ve got their second album coming out soon just along the horizon, as well as a few more surprises, all of which we touched upon in the following interview. That all said, just how did Atom Force get involved in making music in the first place anyway and why synthwave?

For Atom Force his love of music started when he was very young, listening to now seminal classics on vinyl back when they first released. “I grew up in central NY in the 80’s, so I have some really fond memories of that era” Atom Force reminisced when asked. “The first albums I ever got in life came from my parents, which were Michael Jackson‘s Thriller and Phil Collins‘ No Jacket Required. These two albums had a huge influence on me and I’d often find myself attempting to play little solos on my keyboard while the record was playing.”

The road to synthwave would be paved by such records, and more, as “curiosity took hold and I began digging through my father’s LP collection” Atom Force further recollected, “and among the albums I found were Moog (The Electric Eclectics of Dick Hyman) and Switched on Bach by Walter (aka Wendy) Carlos. These albums focused on a keyboardist rather than an entire band, something I had not heard of at the time.  I moved down here to south Georgia in the mid 90’s and began doing a lot of club-focused stuff, everything from goth/industrial to house & breakbeat, and new wave & darkwave was something I was already familiar with, so I later began hearing synthwave in those same circles.”

Speaking more directly about synthwave in particular, when asked who his influences are within the scene, Atom Force exclaimed that “I can’t begin to stress enough how awesome the DJs & media channels have been such as Luigi Donatello, Boogie80, SynthWaves‘ Noah Kaufmann, Rick & Marko of Synthetix Music, Beyond Synth with Andy Last, and Who Ha’s Vox Populi who have all been an amazing source of great music for me. There are so many indie artists I would have never discovered without them.”

When asked what he’s been listening to lately, and if he’d like to ever collaborate with anyone in the scene, Atom Force remarked that “right now (quite literally) I’m listening to 80’s music from around the world, so it’s like getting a taste of the era again for the first time! I think the people I’d like to collaborate with one day are many of the same artists I now listen to regularly such as Bart Graft, Hello Meteor, The Midnight, Computronic, Night Raptor and Gregorio Franco to name but a few although there are so many!”

“I’m also a proud nerd through and through” Atom Force confessed before going on to explain more of his influences, “I love comics, films, RPGs, and work as a booking coordinator for a few conventions in Georgia. I’ve been lucky enough to hang out with some really talented celebrities, many of whom I idolized growing up. Over the past few years I’ve become good friends with Jim Jinkins, animator and creator of Nickelodeon’s Doug. Jim and his family are the nicest people you’ll ever meet. Last year I met Kenn Scott, who played Raphael in the 1990 TMNT film, and this year we’ve got David Naughton from An American Werewolf in London and Mike Christopher, who was in the 1978 version of Dawn of the Dead, has also done light shows for Tangerine Dream and is an avid synth player from what I’ve heard. I get a huge boost of inspiration when meeting these folks.”

When it comes to bringing those inspirations to a head, in terms of producing their music, Atom Force explained that “right now I’m using FL Studio for the majority of work and Audition for post-production stuff. I actually came from making music via hardware and found the compact way of production a bit more flexible for writing tracks. It is just fascinating how far technology has jumped in only a couple of decades. We’re starting to see a lot more synths getting compact makeovers, thus making it less of a hassle to set up, so there’s no doubt I’ll be going back to hardware again at some point.”

With that in mind, will we be seeing Atom Force perform live at any point in the future? “I’ve actually performed quite a few live shows in the past, before doing synthwave” Atom Force revealed, “I was also DJing back then, so we’re talking lugging around 2 tech 12’s, 200lbs worth of vinyl (this was before software and encoded vinyl like Serrato came out), a Juno-106, several drum machines, sequencers, etc. Lugging around all that stuff over the course of several years was hell on my back and, after a car accident in the mid 2000’s, it only made it more difficult. I attended a lot of shows around this time and met some really amazing people. After talking with artists like Dan Deacon and ADULT. [sic], I imagined writing music again even if it wasn’t in the capacity of live shows.”

Luckily for Atom Force, around that time digital music distribution really began to come into it’s own thus opening the doors for not only the perfect opportunity to get started but, more importantly, get noticed. “2007 brought us Bandcamp and Soundcloud, both of which I’m eternally grateful for, as they were windows back into production with a base of listeners I could not hope to generate on YouTube” Atom Force reiterated. “At first, I had convinced myself that I had been away from producing for too long to get back into it, but my brother was super supportive and urged me to get back to it and so I thought, “Ok, I’ll just produce again as a hobby and see where it goes.” Sure enough, I got comfortable with writing music again and in 2015 I released my first track, “Creeps,” as Atom Force. Going back to doing live shows is definitely something I hope to do again.”

As to what’s next for Atom Force, not only are they working on another album but there’s a number of partnerships in the works as well, although there has been a bit of a delay. “Originally I had planned for a November release, but several factors (mainly work) have pushed the release to January” Atom Force lamented before announcing the good news, “however there will be a sweet bonus! I’ll be lining up the release with my official t-shirt release at Square Wave Clothing, who’ll be to offering the album free with the tee purchase!”

Going more into their next album, Atom Force further elaborated by saying that “my second album is titled After Dark and the idea behind it is to tell a story throughout the tracks, from dawn into the night. As the sun sets, the music gets darker as well. After Dark will be my second album following 1988, which was released in April. I had some ideas for darker stuff while doing the first album, but 1988 greatly reflected my childhood and so I wanted the sound to be a bit more uplifting. I’ll also be working on releasing more content soon after on The Patchbay for my fellow producers!”

BONUS ROUND: What goes on your perfect pizza and inside your ideal burrito?

Perfect Pizza: Alfredo sauce substituting the tomato sauce, extra cheese, garlic, bacon, pepperoni, sausage, then more cheese on top of that with a side of cheese dip. In Bermuda. With Phoebe Cates. Last 2 ingredients can be substituted with wishful thinking.

Ideal burrito: Beef, refried beans, and as many different cheeses as I can pile on. You know what? Double that cheese, I don’t need to be able to roll it up!