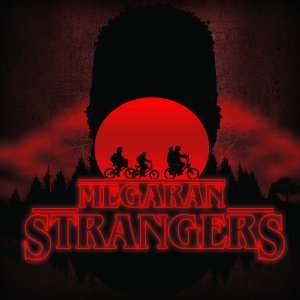 Synthwave is a very versatile genre, able to be utilized in a variety of ways, ebbing and flowing in and out of other genres as its influence spreads not unlike a shadow monster from the upside down. Therefore, it should come to little or no surprise that rap would eventually take notice and lay down some bars to coincide with the beats that only synthwave can provide. While Mega Ran, nerdcore rapper extraordinaire, is by no means the first to do so he still does so with that certain style and flair that only he can provide. However, he’s not going it completely alone as not only is Lynx Kinetic by his side, but he’s also got his own party of synthwavers backing him up by supplying the aforementioned synthbeats thanks to Isidor and DEADLIFE.

Much like Mega Ran did on his album Mat Mania (and it’s sequel, The Revenge), where each song was dedicated to a specific professional wrestler, just about every track on Strangers (except for the first and last which serve more as quick summaries of the show as a whole) highlights a certain character from Stranger Things. While each song is unfortunately rather short, with the longest not even cracking the three minute mark, they’re all still quite sweet like a nougat filled candy bar as Mega Ran makes each of those seconds count with his ultra fast paced lyrical prowess on every track. Except for “Will,” because reasons.

That said, and due to their bite-sized nature, you can’t help but put the entire album on repeat as it’ll be all said and done in only a little under fifteen minutes in total. This is far from being a bad thing and is actually perfect for many reasons because, much like Stranger Things itself, Strangers is able to be binged seemingly quite quickly and makes for a completely compelling experience overall as a result. It’s also name your own price, so grab yourself a copy now!