It’s funny these days to look back not but a couple years ago as I once lamented that the small area of the world in which I call home, the northeastern region of the United States known as New England, was seemingly without a synthwave scene to call it’s own. I used to watch from a distance with envious eyes at the growing scenes on the west coast, down in the south, and across the pond among other locations in the world as synthwave artists emerged from those locations, releasing albums as well as performing live shows; where were they locally?

Turns out they were always here around me just waiting, willing, and able to make their presence known when the time and opportunities presented themselves and now I can proudly say that, yes, New England does in fact have a synthwave scene. Which is to say that for some time the only synthwave act in the area that I really knew about was Crockett who produces out of Boston but, thanks to Scott Forte (who lives in Maine) and his label RetroSynth Records, I became aware of a number of other synthwave acts in New England. Ray Gun Hero, from Massachusetts, and Straplocked, from Connecticut, are just a couple notable examples of such local acts who are signed with RetroSynth Records. 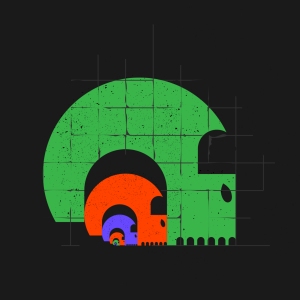 Yet there are still those in the area who are trying to make their way onto the neon soaked grid, currently buried deeper in the more rural areas of the region, and are looking to make a name for themselves if only given the right opportunity. Burial Grid, from the western Massachusetts town of Northampton, is one such act as they recently released their debut album entitled Where We Go and for me to try and accurately describe it’s bizarre background and inspiration in detail would not do it justice.

Instead, in their own words, Burial Grid describes themselves as being “the result of over 600 years worth of somnambulist, ugly slumber on pebbled surfaces. A slumber punctuated by the stirring of over 20 decades worth of horror, science fiction, and esoteric cinema leaking into It’s pitch-shifted periphery. A slumber that, upon finally waking from, It found ghastly bed sores with oscillators, keys, and old knobbed machinery tumbling out of it’s hide in slick, wet polyphony.”

“It’s first mewlings, Where We Go, was spontaneously generated during a 3-week period of bed-rest and recovery from a misdiagnosis of diverticulitis. A 3-week period marked by isolation, growing health-paranoia and body horror, and an obsession with high profile stories of those among us who have shuffled from this plane in mysterious, grisly, and unexplainable means.”

“Where We Go is referential to and inspired by the desolate Hinterkaifeck Murders, Elisa Lam’s surreal fate, the breakdown and vanishing of Lars Mittank, the Nevada desert swallowing Kenny Veach without a trace, the inexplicably inhuman mutilation of an unidentified man in Rio De Janeiro, the notoriously self-chronicled disappearance of Kris Kremers and Lisanne Froon, Olivia Mabel‘s maudlin disintegration after her child’s death, and the terrifying brutality of Houston’s Icebox Murders.”

I don’t know about you, but that’s one of the best damn self-written artist profiles that I’ve ever read; does Burial Grid also write short stories or novels aside from making music? If so, I’d read whatever they’ve got because it legit sent some chills up and down my spine. Every word felt like something Robert Stack would’ve narrated on Unsolved Mysteries, his haunting voice instilling a sense of dread upon me by conjuring up a fear of the unknown; I live for that feeling.

Which, quite honestly, is probably why I’ve become so drawn to this album as the similarly inspired themes of macabre mysteries and intrigues about life, the universe, and everything is so compelling; not to mention the music is rather unique unto itself by eliciting that same uneasiness throughout. It should be noted that this in now way suggests the album is hard to listen to, not at all actually, rather it is in essence not unlike a horror movie condensed into audio. Such a concept is of course not a foreign element to synthwave, what with many acts utilizing such a theme for their work due to taking inspiration from the film soundtracks of John Carpenter, but I think there’s a distinction to be made here.

After all, truth is stranger than fiction and the only thing that’s more terrifying than the sounds of a fictional film is the unsettling ambiance of our actual lives and true unknown horror. It’s voyeuristic, in a way, knowing that the inspirations behind the music on Where We Go are actually based on (mostly) true stories, but Burial Grid is the perfect soundtrack for that uneasy reality.