Hey, remember when I said that I was going to start doing write-ups about my cassette tape collection? Good times! Well, happy days are here once again… END_OF_DOCUMENT_TOKEN_TO_BE_REPLACED

You know what I like? I like concept albums. I like when an album is truly a sum of its parts, without one track outshining any other as merely a “single” that is meant to sell you on the rest. I mean, okay, there are exceptions to the rule; I’ll fully admit that I originally bought Aqua’s “Aquarium” because of “Barbie Girl” and Savage Garden’s self-titled debut for “I Want You” (after seeing them perform it during Nickelodeon’s Kid Choice Awards), but I eventually discovered that those albums were straight up bangers with every single track (to me). No, really!

Regardless, albums without a cohesive story or theme tend to be like a salad bar; you take what you want and leave the rest. Which is perfectly fine, as I really do enjoy plenty of albums like that, but to me there’s truly something to be said for an album which is an all around “experience” from beginning to end. Especially in these days of streaming music where it does seem like, for the most part, “whole” albums take a bit of a backseat to being merely a collection of random songs or just releasing singles instead. Some like croutons, some don’t, y’know? END_OF_DOCUMENT_TOKEN_TO_BE_REPLACED

Today is the start of summer, according to science, and therefore (according to me) it’s also (once again) the summer of synth! So let’s kick things off appropriately with the newest album by Die Scum Inc. entitled “Everending Summer” which, according to them, “seeks to capture the childhood nostalgia of the all too short Canadian summer. The long drives in the back of your parent’s car, nights in the arcade, and days on the lake.”

Die Scum Inc. further claim that “Everending Summer” is a bit of a departure from their “Notion Picture Soundtrack” format which their last two albums, My Fist is Fight and The Epoch Code, were known for but I would argue that it’s really not all that much of a musical detour in hindsight. In case you’re not familiar with their “Notion Picture Soundtrack” concept it’s all about the music with little to no story or background provided. This is done simply so that your mind can fill in the blanks and therefore make up your own narrative along the way.

While “Everending Summer” does have a supplied narrative, namely that of an ode to their memories of Canadian summers during their childhoods, I think I can safely declare that the music is actually quite universal in its ability to invoke similar memories of summer days gone-bye from many a childhood. Which is to say that I too can recall summers down by the lake, at the arcade, and trips in the car with my parents all the same while listening to the album.

However that is not to say that my memories of such are the same as Die Scum Inc. or anyone else listening to this album, of course not, but my overall point here is that Die Scum Inc. have somehow managed to expertly tap directly into the essence of those memories to create such sounds which can so clearly resonate. It’s not unlike a rock being dropped into the middle of a lake, water rippling outward in its wake, as it’s initial effect can still be felt by others across the waves of time. That is why I feel that “Everending Summer” is, in fact, the “Notion Picture Soundtrack” to summer, personal or otherwise, in such a regard.

Oh yeah and if you want this album on cassette, or their previous two albums as well for that matter, then head on over to DieScumInc.com for more information!

There are some who say that the sheer number of releases that fall under the “synthwave” umbrella is overwhelming, to which I don’t entirely disagree for it is hard enough for me to keep up with them all in terms of just simply listening on top of actually trying to write up a review as well, and therefore it is unfortunate when so many releases fall through the proverbial cracks.

Now despite the fact that I listen to a lot of synthwave, and also review it sometimes, that does by no means make me an “expert” on it nor would I ever claim to be as such; I see myself more of a keymaster than a gatekeeper. I also try not to involve myself in seemingly endless and, let’s be honest, pointless debates on what is or isn’t synthwave, which subgenres certain releases actually fit into, and so on and so forth, etc.

What I can do however is help to do my part in shining the spotlight on certain releases which have not only fallen through those aforementioned cracks, for one reason or another, but struggle to even be categorized within a certain subgenre or just synthwave in general. I often wonder why this happens in the first place, of which I am sure there can be countless reasons that are more or less unique to the consequences surrounding each specific release, so there may not really even be a general reason, or if it can even be avoided.

Such were the things I mused when I gazed upon the cover art for the recently released album by low.poly.exception entitled MEGASTRUCTURE(S). I try not to judge anything by it’s cover, as the old saying warns, but while listening to the album I couldn’t help but stare at the art because it reminded me of something although I wasn’t sure as to what for the longest time. I finally figured it out, but before I reveal that revelation I think it prudent for me to somewhat discuss “cyberpunk.”  END_OF_DOCUMENT_TOKEN_TO_BE_REPLACED

I like to imagine that Die Scum Inc. is some kind of low-budget movie studio that actually puts all of said budget into their soundtracks, pumping out the hits to go along with their theater of the mind flicks (what they lovingly call “Notion Pictures”), and if their first release of “My Fist is Fight” was their fatal fury foray into the Martial Arts/Action section of the cerebral video tape rental store, than “The Epoch Code” is certainly their other worldly cyber invasion onto the shelves of the Sci-Fi/Thriller genre and it will infect you.

END_OF_DOCUMENT_TOKEN_TO_BE_REPLACED 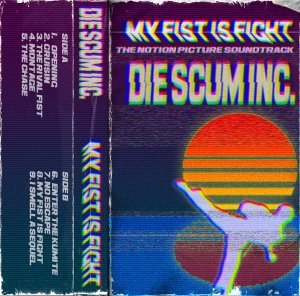 I have a confession to make: I love really cheesy movies. The cheesier the better and there is nothing that oozes more cheese than martial arts films. That said, I really love the concept behind Die Scum Inc.‘s latest release of “My First is Fight: The Notion Picture Soundtrack,” as it presents itself as the soundtrack to a nonexistent action film.

Like my colleague Echosynthetic mentioned in his review, the music lends itself to your imagination in that your brain pieces together the music alongside the theater of your mind and thus the action film in question becomes real; it’s whatever you want it to be! Therefore, to me, it’s the soundtrack to a long lost Godfrey Ho ninja movie! Maybe with Pierre Kirby?

Either way, I must say that my favorite track is “Montage,” because every great movie has one; even Rocky had a montage! That said, I love how the backbeat of this song has that recognizable stinger which you hear in so many kung-fu action flicks. I don’t even know if said stinger has a proper name but, once you hear it, you’ll know exactly what I’m referring to and Die Scum Inc. did an amazing job in using it as a sample. I want this movie to be real, dammit!

Seriously, I cannot recommend this album enough, so use those ninja-like reflexes and order yourself a copy! As of this writing there are still cassette copies to be purchased, so why’re you waiting?  I think I have a screenplay to write…