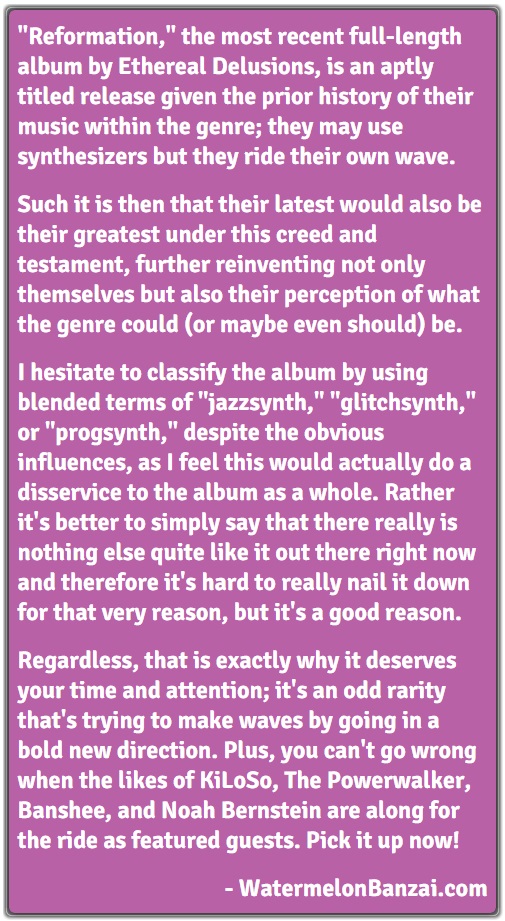 With the #SummerofSynth starting to come to a close we begin to wrap things up with another stellar release by Ethereal Delusions in the form of Ascension. After starting the summer with the release of the single “Wingman (featuring Noah Bernstein),” and then following that up with a collaborative album with KiLoSo entitled DAY|NIGHT (which unfortunately we haven’t got around to reviewing yet due to our hiatus), it ends with another full length album that is easily Ethereal Delusions’ best work yet.

END_OF_DOCUMENT_TOKEN_TO_BE_REPLACED

In a recent news post, where I announced the return of this blog from it’s month long hiatus, I mentioned a certain person by name who helped to design our new banner: Bernadas, one half of the UK based radio show The Night Call along with his friend James. Well, today I am extremely proud to announce that the two of them have started something special in the form of a new synthwave label entitled the Nokogiri Nami Society. Their first act is to put together a compilation of some top talent in the synthwave scene and donate 100% of the proceeds to Yorkshire Cancer Research (516898), which you can learn more about here: http://yorkshirecancerresearch.org.uk/strategy-and-objectives/

As for the Nokogiri Nami Society, they explain their own genesis as follows:

END_OF_DOCUMENT_TOKEN_TO_BE_REPLACED

The #SummerofSynth kicks off strong with a hot new single straight off of Ethereal Delusion‘s upcoming album “Summer Haze,” which is due out on August 1st, but he’s not alone on this one! Much like the title itself, he’s got a Wingman in the form of Noah Bernstein, who absolutely tears it up on this track with his sexy saxophone skills.

The sounds in this song just conjure up images of them both riding along the beach in a suped-up sports car, like a rather infamous crime fighting buddy cop duo from the 1980’s, with the sun setting and giving way to the neon soaked night as they cruise for danger.

They find it on the B-Side, “Outrun the Dark (2017 Edit),” an updated version to a song of the same name from Ethereal Delusion’s “EP1.” I always enjoy when a producer goes back into their catalogue and updates a track, it really shows their progression as an artist, and Ethereal Delusions continues to show off his talent and skills not only with this updated version but with Wingman as well. If this is but a taste of what we can expect come August 1st, I have no doubt that we’re all in for a treat, because passionate producing such as this can’t be stopped.

Also, there’s a music video, which you can check out below!

Ethereal Delusions does it all: hosts a two-hour block of synthwave tunes on his local college radio station, offers up music mastering services, and still finds time to release his own awesome music.

Now, I don’t know exactly who the titular Karlovsky is, or why they’re seeking revenge and from whom, but what I can tell you is that while revenge is often a dish best served cold (ancient Klingon proverb) this album is anything but; it’s straight fire!

Released by TimeSlave Recordings, an amazing up-and-coming synthwave label in it’s own right, “Karlovsky’s Revenge” does contain mostly tracks from Ethereal Delusions’ previous self-release, “Shuttershades,” but also includes two new tracks such as the one sharing it’s name with the album itself. Deservedly so, because it’s a great song, kicking off with an interesting hook that reminded me almost of Maniac Mansion before transitioning into a literal pulse pounding beat that hits you in the chest.

“Am I Dreaming,” the last track on the album, is a great chaser as it starts strong and then slowly winds down alongside a rather creepy narration. Much like FacexHugger, I got a real sci-fi vibe, that really unsettling and spine-tingling sense of space dread. I love it. Like someone saying goodbye as they fall asleep in cryogenic stasis… I don’t know when they’ll wake up, or when the next release from Ethereal Delusions will come, but I can feel it coming…

… in the meantime, buy a shirt, why not?