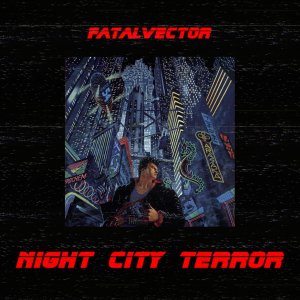 The debut album from Fatalvector could not have come out at a better time; the days are getting shorter, the nights are getting longer, and the temperature is going down. This album has therefore become just the right mood music for these cold dark nights, especially when it rains, as it instills within you an equal mix of creepy vibes and blood pumping beats. Plus, as someone who has followed Fatalvector since they only had one track on SoundCloud, it’s fantastic to see them get to this point.

I get a lot of submissions from artists for their music to be either reviewed or at the very least have some feedback provided. These submissions range anywhere from full albums to single songs or even just some works in progress. That said, I’ve decided to make things easier all around and just lump a few of them together into one post as they pile up. I will most likely be doing this a lot more going forward as a result, so hopefully that works for everyone involved. ❤

Their Twitter profile proclaims that they’re “trying to make darksynth,” but like Yoda said it’s “do or do not, there is no try,” to which I then rightly assure that “yes, you’ve certainly done what you set out to do.” It’s dark, it’s moody, it hits hard, and it’s an early indication of something in the making of which I look forward to hopefully hearing more as a result. When you’ve currently only got two songs to your name, and said songs are as promising as these, I’ve no doubt that what’ll come next will be even better. Which, if fatalvector’s latest postings are any indication, means a soon to be debut EP! Which I will review in time.

The email I got from them was simple and, paraphrasing, went a little bit like: “I got a complete analog setup a few weeks ago, made some things, and would love feedback.” Sure, Bruce James, here you go: I’m digging ’em. It’s almost like the opposite side of the synthcoin to fatalvector in that, while the two of them only have two (publicly available that I know of) songs out there right now, they still show so much potential but for Bruce James it’s obviously the more lighter end of the synthspectrum. That and I appreciate the real raw noise that only an analog setup can provide. Here’s hoping you got more coming down the pipe soon!

To be fair they have a lot more than just this one song to offer, the rest of which can be found on thier YouTube Channel, but I picked this one in particular to feature simply because I thought it was a chill track and for it’s title inspired by Blade Runner 2049. They run a pretty good gamut from the aforementioned chillwave to the more darkwave, which is always nice to see some range, and they’re not entirely beholden to synthwave either as they also dabble in other forms of electronic music too. Click through the following to hear more:

Everyone has to start somewhere and for most that involves playing some covers and the following cover, that of the Alan Parsons Project’s “Sirius”, is a pretty darn good one. It rides that fine line between not deveating too much from the original while at the same time making it their own. MacKoall has another cover up on their SoundCloud, so be sure to hit that link to jump on over there:

I really enjoy the vibe that Tigerhawk 5 is going with on this track, which the eventual album will inevitably follow, but instead of trying to explain it myself let me just instead copy and paste their own straight from their Bandcamp:

Tigerhawk 5: A Galactic 80’s and retro inspired synth-rock duo touching on themes of cosmic exploration, science fiction, loss and retribution. Tigerhawk 5 is a sci-fi space opera that tells the story of a crew destined for the most important of missions and their journey through the galaxy; fighting robots, aliens and many other challenges. Throughout the 7 chapters of this saga the narrative takes the pilot’s chair as much as the music, telling the space-faring story alongside the score written by Hugh Holton and Ross Balsillie. ‘Prologue’ is the first track from the upcoming album, setting the scene for things to come.

There’s nothing I enjoy more than some synthwave with vocals, “synthpop” for those who prefer to keep score, and Flashbot arrived on the scene late last year with a variation of their own which I’ve really come to enjoy and admire. They’ve only got the following two songs to their name, with again the last one being released late last year, so I’m hoping we haven’t heard the last of them because they’ve certainly got some promise and talent to deliver when they’re ready.