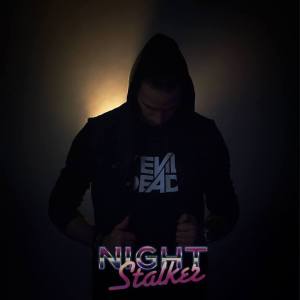 Last week I reviewed “Destination Dystopia” by NightStalker, an excellent collection of dark and gritty synth work peppered with choice voice samples to create a thrilling experience, and now I’m back this week with an exclusive interview to learn more about this stalker of the night in a raw and unedited Q&A session.

Before jumping right in, I just want to say on a personal level that this is my first interview with hopefully many more to come, and that they would not be possible if it wasn’t for how awesome artists in the synthwave scene are when talking one-on-one. NightStalker has been nothing but helpful and responsive, a pleasure to speak with, and I thank him once again for granting me this interview.

END_OF_DOCUMENT_TOKEN_TO_BE_REPLACED

Labeling itself as “a dystopian soundtrack to the end of the world,” this release by NightStalker delivers the goods as a brooding collection of dark synth soaked songs that leave you feeling uneasy in the best way possible; like something straight out of a horror movie or crime thriller.

The opening track, “Tokyo Nights,” while containing vocal sampling in Japanese that I have no idea as to what is being said, is still a great primer which helps lead you into a false sense of security. I say this because the next track, “Lucas Task Force,” is only but a small taste of more brutal things to come.

Rising like a shadow in the night, the song is accompanied by the vocal sampling of a transaction gone wrong, and is a great setup for the next song which really showcases the strengths of NightStalker and their abilities to tell an engaging story with their music.

“Hunting Night” tells the story of the titular NightStalker, a serial killer, and the way in which the music interconnects with the vocal sampling here is just mesmerizing. I got flashbacks to Robert Stack on “Unsolved Mysteries” with the way in which the narrator in the song exposed exposition. The same could certainly be said about the next song, “Highway Hooker,” which features an interesting deathrow confession.

The last song, “Death Chaser,” is just straight up dark synth goodness that really highlights NightStalker’s arsenal of capabilities complete with guitars and distorted drums that hit all the right buttons. So much so that I purchased one of the limited edition cassettes for this release and urge you to do the same. If NightStalker is not on your radar, consider this your signal to do so, because I guarantee that they will be one to watch and listen.